If riding endangered species is in fact illegal (Sea turtles and Manatees for starters), what happened to those two girls and why did those boys jumping on a manatee get off with a little slap on the wrist?


How much trouble this woman could be in 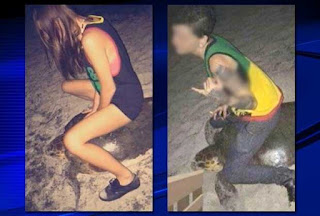 MELBOURNE BEACH -- Pictures on social media show what appear to be girls riding a sea turtle on a Brevard County beach during the critical sea turtle nesting season.


One picture shows what appears to be a young girl looking as if she's riding a large sea turtle, either sitting on or hovering over it with her hands in the air.


The other picture shows another girl, but her hands appeared to be pressed down on the turtle's back. She was either sitting or leaning over its shell.


These pictures of what appear to be two girls riding a sea turtle, allegedly at Melbourne Beach, have sparked outrage on social media and prompted an investigation by the Florida Fish and Wildlife Conservation Commission. It is illegal in Florida to harm or harass sea turtles.


Riding a sea turtle is totally illegal. #WFTV
Posted by Walkingfox at 7:29 AM