Flashback!
This poor young Black Bear Cub
has no adult to show it
how to be a bear,
how to hunt for food
and
how to keep away from 'humans'!

Remember the, not so long ago,

Disgusting, (nauseating),
Pay as you go, 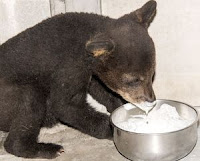 
This bear cub is one of the many victims of the hand changing, money grabbing, government officials, phony bear hunt!


A bear cub was spotted lounging in a tree in College Park Tuesday.


Even though the bear has not returned, residents remained leery about the possibility that it could still be in the area.


A bear was spotted in a tree Tuesday on the 1200 block of Country Club in College Park.


The bear spent some quality time hanging out in a tree in the back yard of a College Park home before it was scared off with a paintball gun Tuesday.


The Orlando Police Department first reported reports of a bear sighting in College Park at about 9 a.m.


The sightings took place in the 1000 blocks of Bryn Mawr and Smith streets, and the 900 block of New Hampshire Street.


"I was actually in the laundry room doing, folding laundry and I looked out the window and I saw a shadow, and I thought, 'That is a very large dog,'" resident Arden Magee said.


Magee said the bear caught her off-guard and her heart began racing.


The bear hung out in a tree for hours until officials shot a paintball gun near the bear, but not at it, in hopes to scare it off. The bear fled the area, according to officials.


Officials were waiting to see if the bear would leave the tree and move on without help. They didn't want to tranquilize or capture the bear because of safety risks to it and people.


At about 9 p.m. Tuesday, the bear was spotted again in a yard near Golfview Street and Orange Blossom Trial.


The bear then ran off and was nowhere in sight, officials said.


The bear appeared to be a juvenile traveling south through College Park, OPD said on its Twitter account.


Officials said they haven't received any additional calls about the bear. They also advised residents to keep trashcans and pet food inside.