Read between the lines, you be the judge

If you cannot get in through the front door use the back door?


Not long ago I wrote about the conditions of chicken companies in China and it was said that some was sold to the USA through Canada? 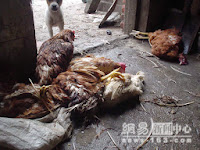 
Now it is plain to see that one very large company is using the chicken it our fast food?


Today we find out that Ham is now a target?


Remember the Rats sold as Lamb in China?


Yum buys its Chicken from China


Yum is the world's largest fast food restaurant company in terms of system units—more than 39,000 restaurants around the world in over 125 countries.


The southern culinary icon announced it will become part of Shuanghui International Holdings in largest takeover of a U.S. company by a Chinese buyer.
Posted by Walkingfox at 7:47 AM